On Tuesday, January 21, 2020, PICT will host British philosopher and historian Jonathan Rée at the Red Wheelbarrow Bookstore. In a friendly, informal setting, Rée will talk about his most recent publication, Witcraft: The Invention of Philosophy in English (Penguin, 2019), and also sign copies of the book.

One of the most well-regarded public intellectuals in Britain, Jonathan Rée was a co-founder of the magazine Radical Philosophy in the 1970s. In the early 1990s, he presented the Channel 4 TV series Talking Liberties, with guests including Jacques Derrida, Paul Ricœur, and Edward Said. Rée spent almost three decades teaching philosophy and history at Middlesex University in London before giving up full-time teaching in order to devote himself to his research. A prolific writer, Rée’s previous books include Proletarian Philosophers (1984), Philosophical Tales (1987), Heidegger (1997), and I See a Voice: Deafness, Language and the Senses (2000).

In 2019, after an interval of twenty years, Jonathan Rée published his most recent book, Witcraft: The Invention of Philosophy in English. The book, which traces how the practice of philosophy became established in the English language, has garnered rave reviews. Writing for the Wall Street Journal, Joseph Epstein describes Witcraft as “an excellent guide along the twisted and tricky path of human thought.” Terry Eagleton, in the Guardian, calls Witcraft “subtle … stylish and entertaining.” And Boyd Tonkin, writing on Witcraft for the Financial Times, urges readers to “enjoy its riches slowly, and savour every generous, erudite and undogmatic page.”

Note: On Wednesday, January 22, PICT will host Jonathan Rée at the Fondation Maison des Sciences de l’Homme (FMSH) for a public lecture on “Wittgenstein and the History of Philosophy.” For further information, please visit this page. 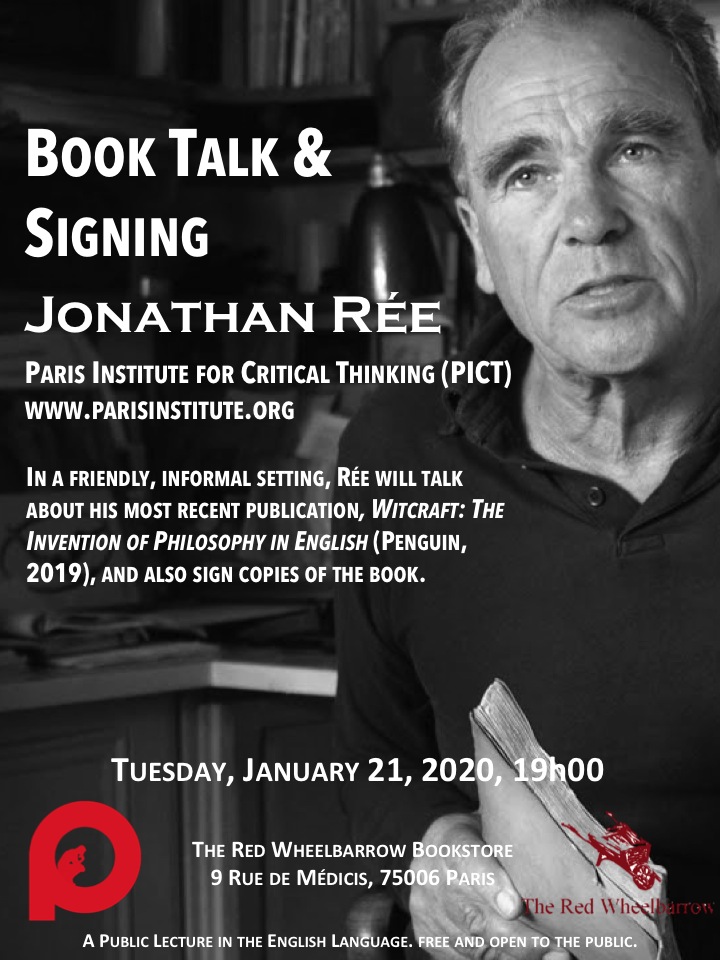