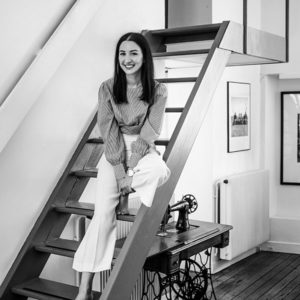 EVRIM EMIR-SAYERS is a founding and core faculty member of PICT. Her teaching and research concern philosophy, particularly phenomenology, philosophy of art, and existentialism.

Evrim received her Ph.D. in Philosophy from the University of Amsterdam in 2018. Her M.A. and M.Phil. degrees are from the Higher Institute of Philosophy, Catholic University of Leuven (Belgium). From 2013 to 2016, Evrim served as Lecturer in Philosophy at San Francisco State University, where she taught on continental philosophy, existentialism, and phenomenology. In the summer of 2013, she was a Research Fellow in Residence at the Netherlands Institute in Turkey (Istanbul). Evrim spent the academic year 2012–13 at Princeton University, where she was a Research Collaborator in the Near Eastern Studies Department and a Graduate Fellow at Wilson College.

Evrim’s article, “Gauging Proximities: An Inquiry into a Possible Nexus Between Middle Eastern and Western Painting,” was published in 2014 by the journal Philosophy and Literature. In 2008, she published Turkish translations of two dialogues by Plato (“Criton” and “Lysis”) as part of the volume, Platon Toplu Diyalogları I. She has also co-translated the memoirs of Turkey’s first professional female journalist, Sabiha Sertel, from Turkish into English; the volume, entitled The Struggle for Modern Turkey: Justice, Activism and a Revolutionary Female Journalist, was published by Bloomsbury in 2019. Evrim is a frequent contributor to international conferences such as the Society for European Philosophy and the Forum for European Philosophy Joint Conference, the European Society for Aesthetics Conference, and the Annual Conference of the Society for Intercultural Philosophy.

To find out more about Evrim, check out her: