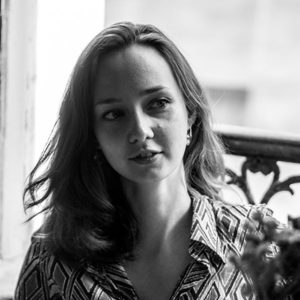 Macha is a professeur certifié who received her MA in Arts, Letters, and Civilization and her BA in Applied Modern Literature, both from the Sorbonne, where she is currently working on a thesis about the rivalry between fiction and reality in the works of Nabokov, Gary, and Cortázar. Since 2008, Macha has been active as a freelance translator—her 2015 book Valentin Berlinsky: Le quatuor d’une vie, an edited French translation of Russian cellist Valentin Berlinsky’s memoirs, earned her the “Prix du Témoignage” at the 2016 Prix des Muses.

Macha is also a concert pianist, having completed her studies at the Regional Conservatory and at the Ecole Normale de Musique A. Cortot in Paris. Laureate of several international awards, she started performing with orchestras at age 15 and has since played as a soloist or chamber musician in various countries, including at the Wigmore Hall (London), the Gaveau and Cortot Halls (Paris), and the Great and Small Halls of the Moscow Conservatory. In recent years, Macha has been active as an audience development manager, working for 3 years with the Secession Orchestra and the piano duet Berlinskaya-Ancelle.

To find out more about Macha, check out her: