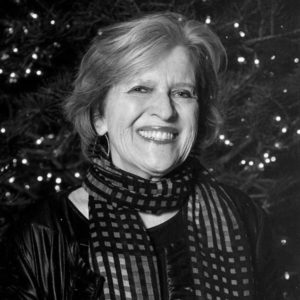 HOLLIS CLAYSON is a historian of nineteenth-century art. She currently serves as Professor of Art History and Bergen Evans Professor in the Humanities at Northwestern University, USA.

In 2013-14, Hollis was Samuel H. Kress Professor at the Center for Advanced Study in the Visual Arts (CASVA), National Gallery of Art, Washington, DC. In 2014, she was named Chevalier dans l’Ordre des Palmes académiques. She was the Visiting Kirk Varnedoe Professor at the Institute of Fine Arts, New York University, in Fall 2015 and held fellowships at CASVA and the Institut national d’histoire de l’art (INHA, Paris) in 2017-18. Her new project studies World’s Fairs, with a particular focus on the reception of the Eiffel Tower in 1889.

Hollis has published widely on Paris-based art practices, including the French capital’s large population of artists from elsewhere. Her books include Painted Love: Prostitution in French Art of the Impressionist Era (1991), Paris in Despair: Art and Everyday Life Under Siege (1870-71) (2002), and Is Paris Still the Capital of the Nineteenth Century? Essays on Art and Modernity, 1850-1900 (2016), co-edited with André Dombrowski. Her latest book is Paris Illuminated: Essays on Art and Lighting in the Belle Époque (2019).

To find out more about Hollis, check out her: