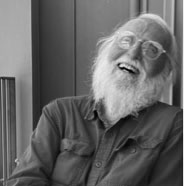 JAMES CLAYSON is a teacher and researcher interested in constructionist, cross-disciplinary work that links science and technology with the liberal arts. He has been especially active in exploring how to combine computer science ideas with those of art and design.

Jim is Professor Emeritus of Mathematics and Computer Science at the American University of Paris (AUP). He has served as Co-director and Dean of the Sarah Lawrence School of Art in Lacoste, France, and also taught at Parsons School of Design in Paris and Deep Springs College in California. Jim’s studies covered Engineering at MIT, Statistics and Operations Research at the University of Chicago, and Economic Development and Anthropology at the School of Oriental and African Studies (SOAS) in London.

Jim has had a number of different careers besides academia. Following graduate school, he was named Director of Operations Research in a multinational company headquartered in Los Angeles, later settling in Paris in 1970 as a corporate consultant. He also spent two years in Kenya researching innovation in the informal sector. Jim’s publications cover economic development, constructionism, and visual modelling.