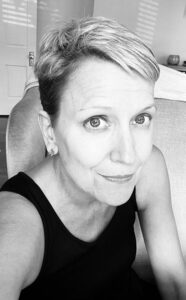 JULIA CAROLINE KNOWLTON is a poet and scholar whose research focuses on the lyric impulse during the French Enlightenment and 19th-century modernité, and who currently explores the depiction of black women in French art and literature.

Julia is Professor and Program Director of French at Agnes Scott College in Atlanta, where she has also served as Department Chair of French & German and Director of the Center for Teaching and Learning. She received her Ph.D. and M.A. in French Literature from the University of North Carolina in Chapel Hill and also holds an M.F.A. in Poetry and Creative Nonfiction from Antioch University in Los Angeles. Julia completed her undergraduate work in French/English at Duke University.

Julia is the author of five books as well as numerous articles and reviews on topics such as La Princesse de Clèves, Mallarmé’s “Un coup de dés,” and Jean-Jacques Rousseau. She has published two poetry chapbooks and a full-length collection of poems; her poems regularly appear in journals such as One Art and Trouvaille Review. Described by the New York Times’ Victoria Chang as “devastatingly lyrical,” Julia’s poetry has been recognized with an Academy of American Poets Prize and a Georgia Author of the Year Award (2018). Julia is currently working on a hybrid guidebook/memoir entitled PARIS A-Z.

To find out more about Julia, check out her: