Let’s Get Bored, the PICT limited podcast series by Salamis Aysegul Sentug, has been included on the website of the International Society of Boredom Studies (ISBS), the scholarly association devoted to promoting and disseminating multidisciplinary research on the topic of boredom.

Upon kind request by the ISBS, PICT and Aysegul were happy to permit the society to host Let’s Get Bored as the inaugural series on the ISBS page in anticipation of the society’s own future podcasts on boredom. ISBS president Josefa Ros Velasco described the move as “a first step to give visibility to Boredom Studies.” Along with the sharing of Let’s Get Bored, PICT joins the institutional network of the ISBS, while Salamis Aysegul Sentug joins the ISBS as an individual member.

Billed as a “four-part journey to the heart of boredom,” Let’s Get Bored was conceived by Aysegul in response to the “staggering amount of boredom” experienced by people around the world as a result of COVID lockdowns. The series explores the concept of boredom from a variety of perspectives, including history, philosophy, literature, and art. A writer, poet, and educator, Aysegul has taught at the British University of Nicosia, Cyprus, as well as the University of Kent. 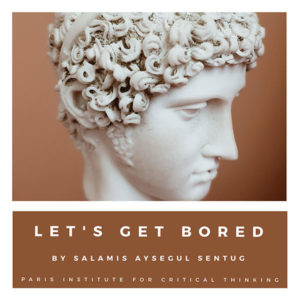