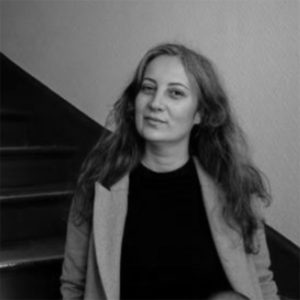 NADA SERHAN is a filmmaker, writer, and educator based in Paris. Her research and film work focus on psychological thrillers and magical realism.

After serving for three years as an English Literature teacher in Bahrain, Nada obtained her M.A. in Comparative Literature and Filmmaking from American University, Washington DC (2014). Entering the world of TV production, she worked on mise-en-scène setups for shows such as Nightmare Next Door and Evil Twins, aired on Investigation Discovery Channel. It was also during this period that she began producing short films and writing her own scripts. In 2016, Nada found her way from DC to Paris, where she completed a one-year program in directing at the École Internationale de Création Audiovisuelle et de Réalisation (EICAR). Having spent 2018 as an independent scriptwriter and script consultant, Nada is currently working on three projects: completing her short film, Yellow (2019), writing a long-form autobiographical poem, and continuing her research on film theory and film aesthetics with an eye to obtaining a Ph.D.

To find out more about Nada, check out her: