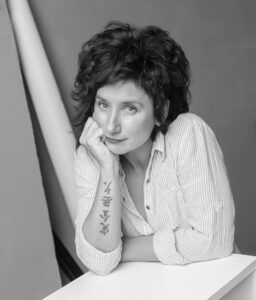 NATASHA LUSHETICH is an interdisciplinary theorist with a background in the arts.

Natasha is Professor of Contemporary Art & Theory at the University of Dundee, and has previously held professorships and lectureships at LaSalle College of the Arts in Singapore, the University of Exeter, Ohio State University, and the Berlin Academy of Arts. Her numerous awards and fellowships include ArtsLink, Fulbright, and an Arts and Humanities Research Council (AHRC) award, and have enabled her to assume research positions in various countries including China and Japan.

Natasha’s books include Interdisciplinary Performance (Palgrave, 2016) and Fluxus: The Practice of Non-Duality (Rodopi, 2014) as well as various edited volumes such as Big Data: A New Medium? (Routledge, 2020) and The Aesthetics of Necropolitics (Rowman and Littlefield, 2018). Her writings on global art, the status of sensory experience in cultural knowledge, critical mediality, biopolitics, and performativity have appeared in journals such as AI & Society, Contemporary Aesthetics, Media Theory, and The Philosophical Salon.

To find out more about Natasha, check out her: