PICT co-founders David Selim Sayers and Evrim Emir-Sayers have been invited to New York University (NYU) for a panel discussion on “New Works in Turkish Literary Translation.” David and Evrim will share the panel with noted translator, scholar, and diplomat Robert P. Finn and Sibel Erol, Professor of Middle Eastern and Islamic Studies at NYU. The event will take place at 18:00 on Monday, March 2, at the Hagop Kevorkian Center for Near Eastern Studies, NYU.

David and Evrim’s co-translated volume, The Struggle for Modern Turkey: Justice, Activism, and a Revolutionary Female Journalist, appeared from I.B. Tauris, an imprint of Bloomsbury, in late 2019. The book offers the first English translation of Roman Gibi (“Like a Novel”), the autobiography of Sabiha Sertel, Turkey’s first female professional journalist. Previously, David co-translated the volume Muhacirnâme: Poetry’s Voice for the Karamanlidhes Refugees (Istos, 2016), a collection of poems written by refugees during the tragic 1923 Turkish-Greek “population exchange.” Evrim is also the translator of the Platonic dialogues “Criton,” “Laches,” and “Lysis” (English to Turkish), published by Eos in 2008.

In our times of increasing national and cultural isolationism, the work of translation—bridging ideas and worldviews from across the world—is more important than ever. What are the potential and limits of translation today? Which texts are chosen for translation, which others are ignored, and why? How should linguistic ability and cross-cultural competency be balanced in a translator’s skill set? What are the challenges that confront translators in their goal to recreate not just the literal meaning, but also the deeper, implicit dimensions of foreign-language texts? And to what extent is such recreation even a realistic aim? The panel will address these questions and more within the specific context of Turkish-English translation.

More details about the event can be found at the NYU website. 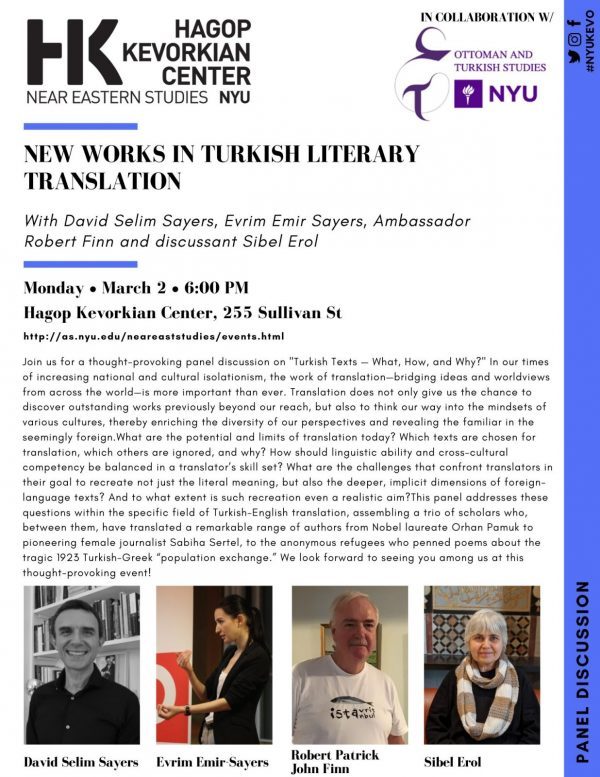