The sixth installment in the PICT Honorary Lectures series was held on Wednesday, 8 June, at the Mairie de Paris Centre – Site Marais. Delivered by intellectual historian François Cusset (University of Nanterre), the talk was entitled “Critique in Critical Condition—Fascism on the Rise.”

Cusset started out by situating critique as a central feature of modernity, listing three specific traditions of critique: the Kantian tradition of intellectual autonomy and courage to think for oneself, the Marxist tradition of social critique via the unveiling of ideologies and the taking of action, and various forms of “criticism” practiced at contemporary universities and centering on intellectual and social refusal.

The latter tradition, so Cusset, has led to intense backlash. Firstly, critical trends such as identity politics and gender studies have been taken to task for a relativism that endangers common social ideals, politics, and projects. Secondly, these trends have produced their own sets of norms and conformism, enabling the political right to adopt a posture of critical and intellectual courage in rejecting them.

Cusset maintained that we need to respond by bridging the gap between “culture and politics,” that is, subjective or group concerns and larger social struggles. Criticism and critique must come together—in other words, specialized critical knowledge and individual social refusal need to connect with the task of unveiling dominant ideologies and seeking action through broad-based social movements.

The lecture was followed by an animated discussion that particularly focused on how to foster critical thinking in the classroom, with Cusset’s engaging style turning the Q&A into an interactive workshop. We would like to thank François Cusset, the PICT team, and everyone who joined us for this energizing event!

Note: François Cusset’s article, “(French) Theory: An Anti-American American Invention,” has just appeared in the second volume of dePICTions, PICT’s annual critical review. A video of his Honorary Lecture will soon be available on our PICT Honorary Lectures page. 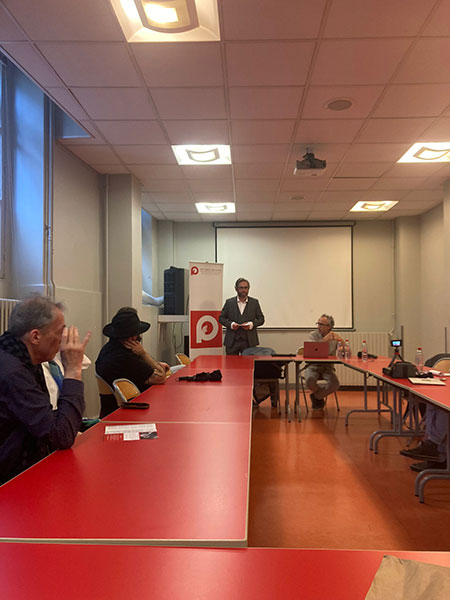