On Wednesday, 8 June 2022, we invite the entire PICT community to the sixth PICT Honorary Lecture: “Critique in Critical Condition–Fascism on the Rise,” a talk by intellectual historian François Cusset (University of Nanterre). The event will be hosted by the Maison de la Vie Associative et Citoyenne du Marais and begin at 19:30.

A critical turn of mind has long been viewed as a cornerstone of modernity and a precondition of progress. Whether called “critical reason” as in Kant or “social critique” as in Marx, it has been regarded as an integral component not only of social change, but of all cultural and intellectual activity.

Today, this critical power appears in a sad state. It has been split internally and questioned morally, with its broad aspiration of social justice seemingly at odds with the claims of identity politics. It has been marketed and commodified, with its political potential undermined by artificial polarization and narcissistic irony. And it has become a gimmick in the hands of the alt-right, which has appropriated ideas such as the Revolution, cultural audacity, and the desire for social change for its own ideological and electoral benefit.

To understand this ordeal—and perhaps help rearm progressist forces—this lecture will focus on three central questions: Firstly, why are social critique and identity politics so often presented as incompatible? Secondly, how is the current devastation of critical reason related to our techno-structure of social media and algorithms? Finally, can we turn to the adventure of so-called “French Theory” in the USA as an early example and warning sign of the situation we face today?

With the promise of thought-provoking questions rather than definite answers, the lecture invites all participants to a critical discussion of criticism and critique. 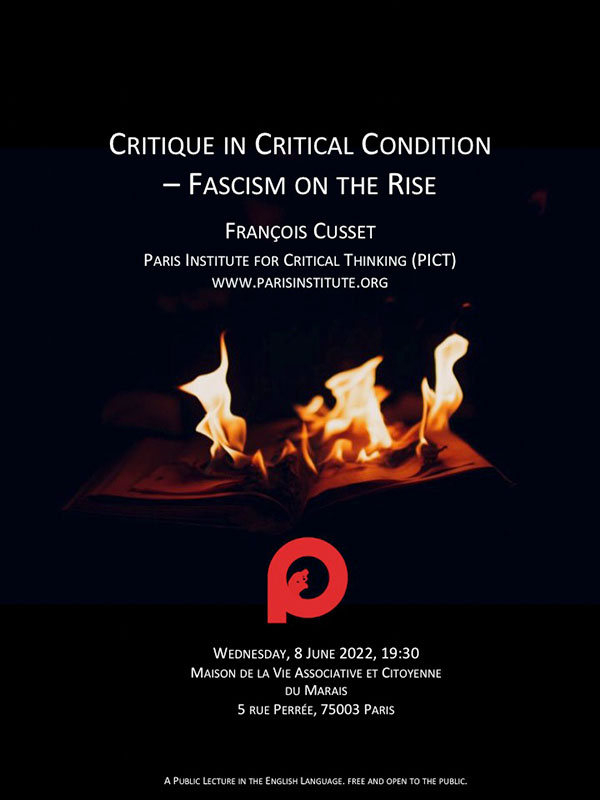