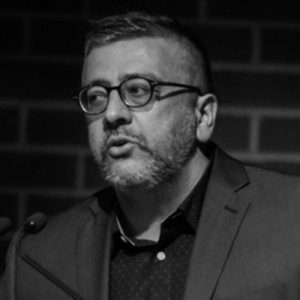 SAMIR GANDESHA is an Associate Professor in the Department of the Humanities and the Director of the Institute for the Humanities at Simon Fraser University. He specializes in modern European thought and culture, with a particular emphasis on the 19th and 20th centuries.

Samir’s work has appeared in Political Theory, New German Critique, Constellations, Logos, Kant Studien, Philosophy and Social Criticism, Topia, European Legacy, European Journal of Social Theory, Art Papers, Cambridge Companion to Adorno and Herbert Marcuse: A Critical Reader as well as in several other edited books. He is co-editor with Lars Rensmann of Arendt and Adorno: Political and Philosophical Investigations (Stanford, 2012). He is co-editor (with Johan Hartle) of Spell of Capital: Reification and Spectacle (University of Amsterdam Press, 2017) and Aesthetic Marx (Bloomsbury Press, 2017) also with Johan Hartle. In the Spring of 2017, he was the Liu Boming Visiting Scholar in Philosophy at the University of Nanjing and Visiting Lecturer at Suzhou University of Science and Technology in China. He also taught a course on the “Neo-Liberal Personality” in the Summer Semester at the University of Sao Paulo in Brazil in February, 2019 and is a regular contributor to openDemocracy.

To find out more about Samir, check out his: