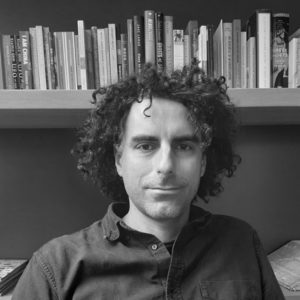 SAMUEL LEADER is a Paris-based writer, editor, and university lecturer originally from the UK. He has taught writing for almost two decades in the US and Europe.

Samuel holds a B.A. in Philosophy and Modern Languages from the University of Oxford and an M.F.A. in Fiction from UC Irvine. He has served as Lecturer in Literature and Creative Writing at UC Irvine, NYU, Bard College, and Rhode Island School of Design, where he taught courses in multi-disciplinary writing and studio practice. He has led many private writing workshops in the US and the UK, has taught incarcerated women through the Bard Prison Initiative, and continues to mentor refugees and torture survivors at Freedom from Torture in London.

Samuel’s fiction has been published in Shankpainter and Editions La Marelle, and has earned him fellowships from the Fine Arts Work Center in Provincetown (2009, 2013), the Lower Manhattan Cultural Council (2012), the MacDowell Colony (2014), the Dora Maar House (2014), and, most recently, La Marelle in Marseilles (2017). His ongoing writing project is a novel about a French collaborator with the German occupiers during the Second World War. It features, among other things, a goldfinch, a missing woman, Max Ernst, a hero of the French Resistance, and a very old demographer on trial for crimes against humanity.