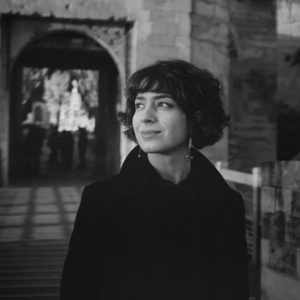 YONCA TALU is a film critic and director based in Paris.

Receiving her B.F.A. in Film and Television from the Tisch School of the Arts, New York University (2016), Yonca went on to obtain her M.A. from the École normale supérieure (2019) with a thesis on the portrayal of historical trauma in the films of Alain Resnais from 1950 to 1963 and the intersections of this portrayal with modern American horror cinema. While at Tisch, Yonca worked as writer, director, editor, and producer on a variety of short films; her graduation film, Where’s the Fire, received the World Student Narrative Short Award at the 2019 Key West Film Festival and the Undergraduate Craft Award for Production Design at NYU’s own 2019 First Run Film Festival.

In 2019, Yonca was engaged by the AFC (Association française des directeurs de la photographie cinématographique) to moderate the inaugural Leçon de lumière, featuring Caroline Champetier, at the La Rochelle Film Festival. In 2020, Yonca moderated two master classes, one by Juliette Binoche with Thomas Aïdan at the Premiers Plans Festival in Angers and the other with cinematographers Jonathan Ricquebourg and Elin Kirschfink at the Festival Chefs Op’ en Lumière in Chalon-sur-Saône. Most recently, in 2021, Yonca moderated a master class with Bruno Nuytten at the EnergaCAMERIMAGE Film Festival in Toruń, Poland.

Finally, Yonca is a film critic and European correspondent for Film Comment, the magazine of Film at Lincoln Center, New York. She is also a regular contributor to Metrograph Journal, the publication of New York’s Metrograph theater. Her articles include interviews with artists such as Mathieu Amalric, Claire Denis, Isabelle Huppert, and Anna Karina.

To find out more about Yonca, check out her: