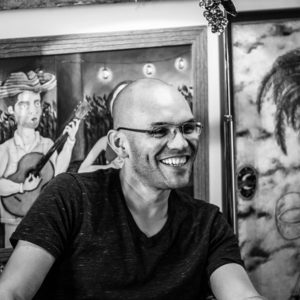 HECTOR “YUCA” ULLOQUE is a founding and core faculty member of PICT. He is a film director, director of photography, editor, and producer whose teaching is geared towards film professionals, aspiring filmmakers, and film aficionados.

Hector is co-founder of the film production company, Medio de Contención Producciones, with the historian and anthropologist Manuel Ruiz Montealegre. His first documentary, Hartos Evos Aquí Hay (2006), won the Best Documentary Prize at the Biarritz Festival 2006 and the Otras Miradas (Other Looks) Award 2008 from the Latin American Council of Social Sciences. The first feature film produced by Hector and Montealegre, Valley of Souls (Nicolás Rincón Gille, 2019), was awarded the Etoile d’Or for Best Film at the 18th Marrakech International Film Festival and the Special Mention of the Jury at the 42nd Festival des 3 Continents. Hector is also a founding member, curator, and programmer of the association Le Chien qui Aboie in Paris, which aims to promote and distribute Colombian and Latin American cinema in France and Europe.

Hector’s activities in the field of film education include organizing and producing the 2017 workshop “Taller Filmando en Cuba” with German filmmaker Werner Herzog and the 2014 workshop “Taller Filmando en Colombia” with the late Iranian director Abbas Kiarostami. His 2014 collaborations with Kiarostami also include a master class with the filmmaker at the Jorge Eliecer Gaitán theater and a retrospective of his work at the Cinemateca Distrital and at the Festival Internacional de cine de Cartagena – FICCI 2014. Since 2012, Hector has been developing Cinescuela, a project combining cinema, audiovisual education, and ICT (Information and Communication Technologies). From the time of its inception, Cinescuela has been implemented in several educational establishments, cultural centres, and over 1200 sites of the National Network of Public Libraries of Colombia.

To find out more about Hector, check out his: