On Friday, March 15, 2019, PICT will co-sponsor the panel, “Critical Conversations on the Neurosciences,” at the Maison des Sciences de l’Homme. The panel is organized by Alexander I. Stingl (Collège d’Etudes Mondiales) and co-sponsored by the Paris Institute for Critical Thinking (PICT), Collège d’Etudes Mondiales (FMSH), and the Independent Social Research Foundation (ISRF).

The “brain” sciences (neuro-/cognitive sciences) have a great effect on how we explain (and sometimes explain away) our everyday behavior. According to the media, more and more people suffer from mental health issues, depression, burnout, and brain-related health problems such as migraine. In criminal court, a perpetrator’s crimes are often judged with the input of experts on cognitive science. Crafty entrepreneurs attempt to understand the ways of the brain to better target ads and product placements. And even children have been known to justify naughty behavior by claiming that “my brain made me do it.”

The brain has become politicized: there is talk of “neuropolitics,” with certain researchers stating that even our vote is a matter of brain structures, and that there are such things as liberal and conservative brains. Clearly, then, neurosciences and cognitive sciences can be used to surveil and control our lives or to generate more autonomy. We need critical conversations that help us understand both the risks and opportunities presented by these fields. Led by keynote speaker Victoria Pitts-Taylor (Wesleyan University), this panel aims at starting exactly this kind of conversation.

Professor of Feminist, Gender, and Sexuality Studies; Science in Society; and Sociology
Author of The Brain’s Body: Neuroscience and Corporeal Politics (Duke University Press)
Recipient of the 2017 Robert K. Merton Award and the 2017 Feminist Philosophy of Science Prize awarded by the Women’s Caucus of the Philosophy of Science Association)

Organized and Introduced by:

Alexander I. Stingl
Collège d’études mondiales, author of The Digital Coloniality of Power 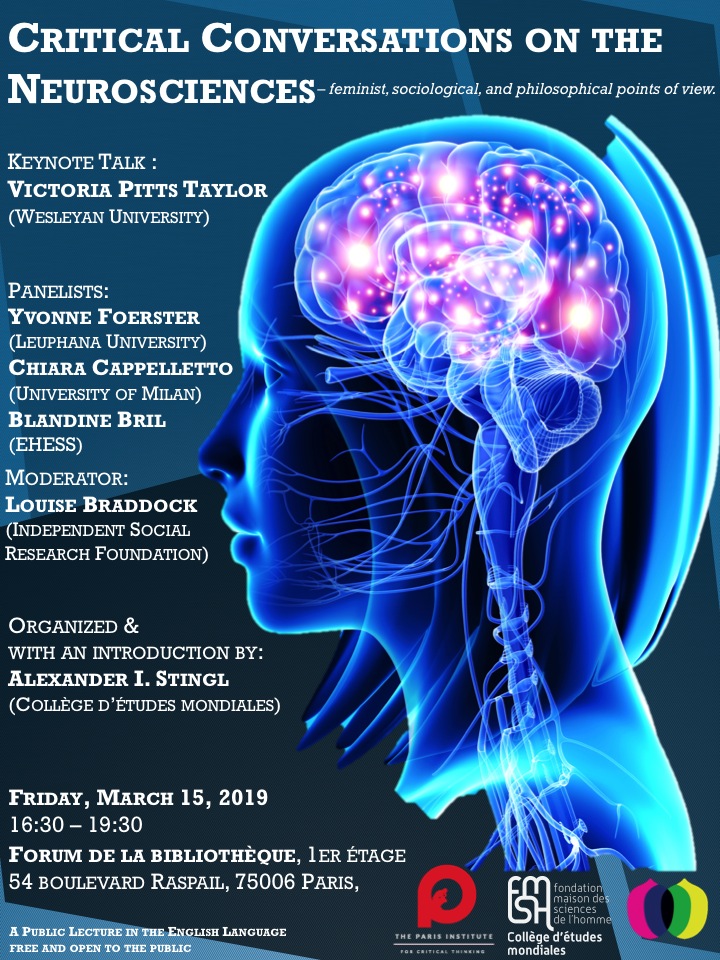